Books That Hurt Your Head

I feel like I've managed some good reading over the holidays which is so satisfying. I've read some nice 'light' books that are good to sigh and giggle through (I'll review those next week) and I've read a couple that have really stayed with me and made me think.

Recently I was sent these couple to read and I have really done a lot of reflection after reading them.

Before I Go by Colleen Oakley 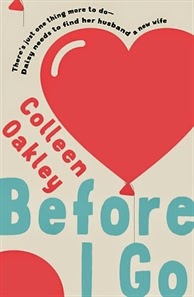 For a debut novel Oakley hasn't shied away from the big topics. The novel follows 27 year old Daisy who has been given a terminal diagnosis and a very short time frame. As she slides all over the feelings it brings up she decides the one legacy she wants to leave for her husband is to find him a new wife. Daisy can't bear to think of him alone and lonely. For such a depressing premise this book is actually a nice read - yes I shed some tears but not all the way through. Oakley manages to write in such a way that you aren't left a shuddering wreck at the end of each chapter - in fact I only cried in the last chapter and I am an open book weeper.

What this book left with me most was actually about the dynamics of being a couple. How we act to protect the one we love, the decisions we make without consultation that are motivated by love but lack wisdom. Mostly it left me with the thought that honesty, in the bearing-my-whole-soul kind of way, is the only way we can truly connect and build real love, even if it feels scary and risky and hard.

Don't be scared off by the sadness of the topic this is not a hard read but it has left me thinking in all the right ways.
Details - Allen & Unwin, Jan 2015 RRP$29.99. Also available as an ebook.

The Disreputable History of Frankie Landau-Banks by Emily Lockhart 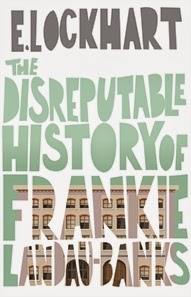 Despite the fact that the title is so long it takes up the whole cover of the book I loved this book. I actually found it really hard to engage with for the first part of the book. It is told from an 'eye of God' kind of voice. Sometimes it reads like an essay or a character file from a psychologist and initially I found that hard to get past, or into, or something!

The novel follows Frankie, a highly intelligent young woman as a junior at a privileged school, who finds herself projected up the ranks of popularity and recognition by the boy who chooses her as a girlfriend. The problem is that Frankie begins to realise that she has more to offer than just being the girlfriend at the same time she realises that the boys club will always be just that. And in this quandary Frankie and her superior abilities come to life with consequences that she doesn't see coming.

This book is one I have thought about and talked about and ruminated on quite a lot since I finished reading it. It is confronting in a way I didn't expect it to be. It makes me think about my femininity and the ways in which it defines or limits me - it makes me realise I have been blessed with some very good men in my life (personally and professionally) who have allowed me to shine but I also mourn this lack of being able to be a comrade with some of the great guys I know. I friend yes but a comrade no.... if that makes no sense I think it will after you read the novel.

Reading this book I wonder if Lockhart's own significant intelligence has at times not been acknowledged because of people not being able to see past her youth and beauty. Perhaps I am getting too Freud on it it's certainly not a Lady Macbeth "come, you spirits that tend on mortal thoughts, unsex me here" piece of writing but it examines gender boundaries in a way I haven't thought about for some time, if ever in some instances.

It is an YA novel and I have also read Lockhart's novel We Were Liars last year. The writing is incredibly strong. Lockhart is clearly a lover of words and she weaves them with real skill. For the word geeks there will be sections of this novel that may make you feel like drooling. I would certainly be open to reading other things she writes she certainly has a talent for telling a story.