Memoirs - and exposing yourself

The following books are vastly different but as memoirs are the personal stories of people. I found these memoirs really interesting - I also pondered the courage it takes to write with such honesty and candor. 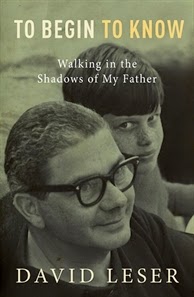 To Begin to Know by David Leser
Leser's family escaped the Holocaust to NZ and then Australia. His father became an institution in his own right as a publisher of the most glamorous of magazines first in Australia and then throughout the world. Leser's world growing up was one of glamour and prestige. For much of his life as a writer himself he sought to push against his father's world, to balance the loving and loathing he found in the world of his father and to an extent in the man himself.

Leser writes with real honesty - at times his experiences are somewhat alarming and his own prejudice against the rich and privileged for much of his life is also evident. But he writes with humanity and with the humility that comes from honest inward seeking. He paints himself neither as hero nor victim and he explores the tenuousness of all his relationships, especially that of the father and son.

His work has taken him all over the world and into the lives of many different wonderful, and not-so-wonderful people but again and again it comes back to who he his, how the wisdom of others has influenced him and the enduring power and influence of his father's role in his life.

I think this book would interest anyone who wants to write, anyone who is exploring the complexities of their relationship with their family of origin, and anyone who is prepared to consider searching and judging themselves more deeply.

It is a story of success and loss and ultimately for me of finding contentment and peace in the imperfection.
Details Allen & Unwin.July 2014 RRP $32.99 Aus available as an ebook. 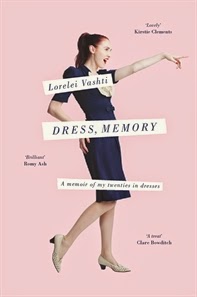 Dress, Memory by Lorelei Vashti
I was excited to receive this book - it's about measuring your life by the clothes you wear. I could relate right from the get go! Vashti chooses a dress that signifies each year of her 20s - and there are photos, yay! I would have been so disappointed with just sketches or worse, nothing.

The book has a chapter (plus a couple) for each year in Vashti's twenties. Each chapter outlines major events, triumphs, disappointments and disillusions and each describes a dress and a significant day that encapsulates what that year essentially meant to Vashti.

Far from a dash of fabulousness from one year to the next this book tells the story of a woman caught in her twenties watching the rest of the world find their way as she looks for hers, in many places. Vashti's twenties unfold with rather a lot of personal difficulty but end with hope and answers. I think many people would relate to Vashti's journey and even if you are just in it for the clothes - you'll like it too. Baby pink cross-over jumpsuit anyone? 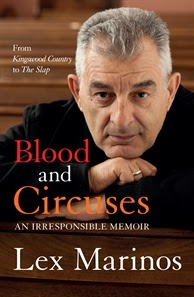 Blood and Circuses by Lex Marinos
I so enjoyed this memoir. Marinos' life in radio, film, theatre and TV is so interesting and the variety of opportunities that have come his way because of his talent and also because of his Greek heritage and being a 'wog' (which, as a non-Australian, I think is a derogatory term used on anyone of non-English European heritage). From growing up feeling ashamed of his heritage to coming to value it and recognise it as part of who he is Marinos is engaging.

His life is full of adventure and mischief and he has certainly achieved a lot and had many wonderful experiences so far. As a person I imagine he'd always have a twinkle in his eye and a plan for misadventure in mind.

This book will be enjoyed by anyone who loves theatre and performance (and sport!) and is interested in how it developed at time when Australia was learning to love and value its own uniqueness rather than try to imitate 'the English way'. For any fans of Marinos in any of his multitude of roles - radio, film, theatre, TV this book will share more of the man whose talent they admire. Marinos tells a good tale, he is entertaining and there is such a lot going on in his life the book never becomes dull.

I guess what makes all of these memoirs work is the author's commitment to honesty. (And the fact they are good writers!) When you read them it really feels as though they have 'dropped the towel' and let you see the true them. They have resisted the urge to write themselves well and honorably and have owned their shortcomings and failures, and so you relate to them as people.

Their own ability to allow you to see the true them and possibly judge them means that you don't. It must be very freeing to be in the public eye and to write books like these because you no longer have anything to hide - if people want to expose you, you have already done it yourself. Perhaps we all need a little more of this kind of sharing?


love you more than having nothing to hide xxxx