I've decided that Chic Lit (as in fairly easy, sometimes 'frothy' reads aimed at a female audience) has a happy place in my bookshelves. It's not what I usually buy but there are times when I just need something that isn't too taxing or intense to read.

But I still have specific things I like and dislike. My general dislikes are:

Whew, now that those gripes are off my chest I'm going to let you in on some chic lit I've been consuming lately. 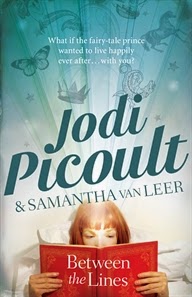 Between the Lines by Jodi Picoult and Samantha Van Leer
This is a mother-daughter authored book which I find super sweet and kind of amazing, especially considering Van Leer is a junior in high school. Could you get through all the sweat of writing a novel with your mama and keep the relationship in tact? It's a teenage read and a romance but done nicely and a little quirky to boot. It's a better written less cheesy and shallow version of the sweet valley high books I used to read as a teenager (I know, don't think too little of me will you?!!) No sex, pretty sure no swearing and a protagonist who is not popular or self-confident. I think a lot of adolescent and teenage girls could enjoy this tale which is told by 2 different characters and has a fairy tale running through it. The novel which is a decent size and length is also interspersed with pencil drawings and silhouettes.
Details Allen and Unwin, August 2014, RRP $ 14.99 Aus. Mothers and Daughters by Kylie Ladd
This novel is based on a week away for 4 mothers and their teenage daughters to a very remote dry (as in, alcohol free) community in the far, far north of Australia. Considerably more 'grown-up' than Between the Lines in my book this is an adult only read. Ladd is clearly a strong author and she manages to tell the story of the week from the perspectives of 8 different characters across 2 strong age bands. The narrative is pacey and the characters are well drawn. I can see this book getting a lot of positive reviews for the real and complex relationships it manages to portray. I didn't find it an easy read. There is a lot of swearing in the book (and not from the teenagers) and a lot of a way of living and perceiving life that I found hard to relate to. Mothers who are unfulfilled, unhappy and given to a lot of drinking, daughters who are risky and disrespectful (though these things aren't true of all the characters) and experiences I know happen but I'd probably rather not read about. I can imagine, however,  it will strike a chord for a lot of readers though and particularly women who are parenting through the transition of their daughter become teenagers and pushing them away. I did engage with the story though and shed a few tears, had some laughs and wanted to yell at a couple of characters loudly over the course of the novel. I'm sure there will be those who disagree with my reservations on this one and I am impressed by much of what Ladd has achieved. (She also has a PhD in neuropsychology which is pretty impressive!) I also loved the way Ladd confronts racism and challenges ways of thinking about 'cultural experiences'.
Details Allen & Unwin, August 2014, RRP $29.99 Aus, available as an ebook. 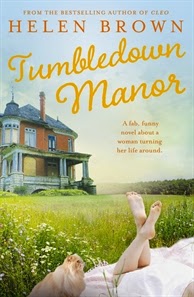 Tumbledown Manor by Helen Brown
This novel is a real chic-lit novel. I read it fast. I laughed aloud a couple of times (which happens a lot in real life but rarely when I am reading). The central character, who happens to be a novelist writing a trilogy on the Bronte sisters, has her life fall apart and she is destined to start anew. Against the odds and everyone's best advice she buys an old manor in rural-ish Victoria which has family connections and sets about refurbishing it. There are shocks, mysteries, a love interest, a controlling sister, a disapproving great-Aunt, well loved but sometimes misunderstood children  and an ex-husband and a floozy included in the cast of characters. It is clearly and Australian setting and I think will appeal to those who have the landscape of Australia in their bones and love it's wildness and native animals. It's upbeat and happy and it's an enjoyable read. Perfect for a hot summer with a cold drink. I think Brown has invested a lot of herself into the pages of the book and I really like the interiors aspect of the novel - doing up houses is fun when you don't have to invest any elbow grease!
Details Allen & Unwin, August 2014, RRP $29.99 Aus, available as an ebook.

Interestingly both Tumbledown Manor and Mothers and Daughters confront the issue of lingering racism towards Aboriginal people. And the attitudes that have kept peoples and cultures apart across generations. In the case of Mothers and Daughters I found these both shocking (to consider some attitudes that people may still hold) but also very encouraging - to see someone who has considerable talent use this to confront stereotypes and challenge assumed ways of thinking and doing things in the context of what will be a widely read novel is 'art' changing the world. The Wedding Quilt by Jennifer Chiavereni
I grabbed this off the shelf on the 'recently acquired' section of the library (a great section to hang around in!) This is one in a series and I have read a few of them in the past. I love the characters in these books and I think Chiavereni does portray the relationships that women and men share as friends and lovers beautifully. This one centres around the gathering of all the Elm Creek Quilters to celebrate the wedding of Sarah's daughter Caroline. There are lots of quilts and reflecting how each person in the 'quilt family' came to play such an important role in their lives. I found the writing enjoyable and easy to read. My only critique of the book would be that it spends most of the book retelling all the story-lines of the other books in the series so you end up skipping a lot (really quite a lot) because you have already read what happened in those ones or, if it was the first one you picked up, quite a lot of the other novels would be spoiled. I'm not quite sure why the author does this except as a filler for not having enough to fill the novel with the current story. That said if you like quilting, thinking about 'blocks' and beautiful friendships you will really enjoy any of these novels but you won't need to read them all. Perfect for a winter's night wrapped up under a quilt. I'd certainly be happy to read other novels she has written.
Details Dutton, Nov 2011, RRP $16.00 US, available as an ebook.

...so quite a range in there and definitely a lot of contrast between them and the memoirs I have been reading lately. I do like to change things up and each of these books have given me things to think about and enjoy. I like that there is such a diverse range of genres and weight in the 'chic-lit' family.