A Good Place to Hide - reading that challenges

I actually received this book a while ago to read and review but I had to wrangle it off The Atlas who caught sight of it on my 'to-read' pile. 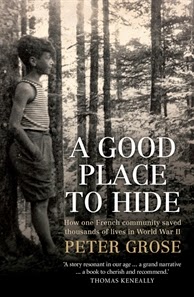 A Good Place to Hide by Peter Grose tells the story of a French community who refused to bow to occupation or to exclude others when they themselves were in need. It is a community that took risks, didn't ask questions or tell tales, a community who were prepared to put the needs of others before their own. This beautiful community was skilfully lead by 2 staunch pacifist preachers, a community credited with saving the lives of thousands.

This is the kind of book the world needs to be reminded of. In a climate of anti-refugees and closed borders and in a world where the news tells tales of genocide against minorities we have lessons to learn from this book.

As I look at the side of this book there are folded corners where I have nodded and thought 'I need to revisit these thoughts'.

As a non-fiction account it isn't a quick read but it is a hopeful read, a challenging read and a book that resonates as much with our times as with the specific history to which it refers.

Even at the conclusion of war and occupation the community was encouraged and admonished to keep their generosity and gentleness towards the enemy as they had towards all who came to them in need during the war.

These coming tests will tell us all what kind of people we are. There will be those who choose the selfish life, who seek to profit from the suffering of others. And there will be those who will instead allow themselves to be swept up by a spirit of enthusiasm, sacrifice and devotion. p 229

I don't love war books and although I do like studying histories I generally avoid war and the atrocities of WW2 because it is so heartbreaking. Even with this attitude I found this book interesting and engaging. It doesn't labour the terrors of war instead it profiles and tells the stories of many wonderful and courageous people who were 'ordinary people' who chose to live extraordinarily during a terrible time for them, their country and others.

I love that the book included a 'whatever happened to..' section for some of the key characters.

This book is well written and very readable. There are times and dates and French locations and phrases but on the whole it is very accessible. If you want a book to inspire and challenge or if you love history I think you will really enjoy this account of a place I had never heard of.