As a person I love surprises - to the point where if I get sent a birthday gift I don't take the outside packaging off in case they haven't wrapped it inside or I guess the gift from its shape. So when I am reading I kind of hate that I can't help guessing or feeling like I know where a story is going to go. 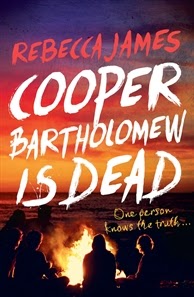 Cooper Bartholomew is Dead is sort of sad and hard right from the outset because it starts with Cooper's death and then it goes backwards and you start to love him and his friends and yet you know he's dead/going to die.

But it is clever and it is a bit of a thriller and I found myself thinking I knew where it was going and I was wrong, then I was right .. or so I thought and then I was way off track and all sorts of things in between. I was surprised in all the right ways of a well written book.

The story is told from 4 different characters only, each heading up short chapters throughout - sometimes in some kind of order, often not. Cooper, Libby, Sebastian and Claire - each with their perspective, each with a very different relationship with Cooper.

Did Cooper commit suicide? That is the official finding and only one person is asking questions. Is it desperate delusion or just clear thinking when everyone else is reeling in shock.

This book is aimed at a YA audience. It does have sex, drug taking and swearing in it but none at a level I found personally offensive. I guess on the whole those things felt contextual and part of the narrative rather than just thrown in to be 'cool with the kids.' I'm sure people will draw different conclusions about that.

This is a quick read I did it over a couple of days and I found myself wanting to read more and sort of dreading reading more as well as the narrative unfolded because it started with his death and you knew it wasn't going to be reversed - so even if all the questions were answered you still couldn't stop the death.

This longing for it not to happen speaks to the relate ability of the narrative.

A good read for getting lost in. A new author to me although she does have 2 other novels already on the market that have been very well received - her first selling in 52 different countries (that has to feel good as an author).

ps - I'll be back later today with something I've made and it won't be my CV which is what I really need to make at the moment!