If you are wanting a read that tangles around you and makes you think Goodbye Sweetheart by Marion Halligan is a good choice. Although it is very different from The Particular Sadness of Lemoncake, which I reviewed a while ago, it has a similar kind of feel - it's almost dreamlike. 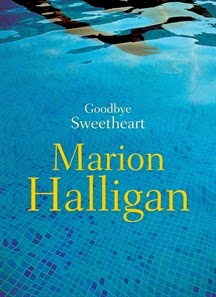 William Cecil father, husband and ex-husband x2 dies and the book is an unravelling of his life and the lives of those who have lost him. Each character is unveiled in their own story and slowly the stories start to come together and we glimpse backwards and forwards between the stories.

This story isn't complicated but it isn't simple and straightforward either. It carries a kind of spirituality through it and examines, subtly, the ways in which we are influenced by others.

This is one I'll be recommending to people who love literature (in the high brow sense of the word) and who like language. Perfect for whiling away afternoons with a view of a stormy sea. Thought provoking in an offbeat way.

The author has published twenty books, of which ten are novels and has received an AM for her services to literature as well as being shortlisted for many awards.